A great leader understands and can execute 3 principles:

Most people associate leadership disproportionately with the first element: inspiring the group.

They think of charismatic leaders like Steve Jobs delivering lofty speeches that blow people away and motivate them to perform. In truth, mobilizing people is only about 5 percent of the leader’s job. The best leaders dedicate almost all of their time to the latter two elements: making great decisions and executing consistently with those decisions.

So how does a leader go about making great decisions?

The fact that you have people working for you means you very likely won't know everything yourself. You need a way to develop and understand all the relevant facts and opinions.

The best way to do that is through a meeting. But NOT useless, time wasting meetings with no decisions.

A great meeting consists of:

WHO always needs a specific name, because "the team" doesn't stay away at night worrying about getting things done.

WHAT must be defined very clearly so everyone understands.

WHEN should follow Parkinson's Law that work expands to fill the time allotted. Keep timelines tight enough to maintain a medium level of anxiety.

Effective meetings are the most efficient way to develop the facts and opinions necessary to make a great decision.

Running a meeting efficiently and effectively as a leader starts with a simple to say but difficult to do concept: As a leader your job is to be right at the end of the meeting, not at the beginning of the meeting.

It's important to not let on about what you're thinking, so members of your team can't immediately take their usual sides: Always agree, disagree, or be neutral.

Make sure everyone engages: Introverts and extraverts. The introverts in the room may have great opinions, but prefer to be called on.

Start with the most junior person in the room and work your way up. Don't let the bosses answer everything!

Always ask for and prefer data over what people feel about an issue.

Leaders at Honeywell wouldn’t have known a good strategic decision if it bit them in the leg, because they weren’t putting in the time to understand their businesses and to regard them critically. To remedy this problem, I spent a great deal of time defining what it meant to make decisions in an honest, informed, deliberate way. The first and best way to do that, I realized, was to model the process of critical inquiry myself. I’d make it clear that, yes, we were going to push ourselves to achieve two conflicting goals
at the same time. But rather than simply dictate these goals, I’d start team members down the path to making a sound decision, asking them critical questions about their businesses and prompting them to generate creative solutions.

"Rather than simply dictate these goals, I’d start team members down the path to making a sound decision, asking them critical questions about their businesses and prompting them to generate creative solutions."

The conversation I had with Rich in Aerospace was typical. Rather than listening passively to a presentation, I’d interrupt—firmly
at times, but politely—with questions about the business. I would pose key questions to teams in advance of our meetings for them to ponder. Listening closely to their answers, I’d follow up with still more queries, and make it clear when I wasn’t satisfied. Was I aggressive, demanding, maybe even a little (or more than a little) annoying? Absolutely. But, as the old saying goes, progress
occurs because of the irrational demands of general management. I firmly believe that. Leaders must be demanding of their people, otherwise they’ll achieve only marginal results. People and organizations are capable of far more than they think possible. At the same time, leaders don’t have to be nasty about it. I always tried to pose my questions courteously, remembering how as an employee I responded better when leaders showed me respect rather than telling me that I was wrong or barking out an order.

"People and organizations are capable of far more than they think possible."

Day after day, meeting after meeting, I’d politely but persistently inquire about key elements of the business. Sometimes people took my politeness as a sign of weakness. When they did, I corrected that impression. Others reacted negatively to all of my questions. Over time, they either developed more intellectual rigor or left the company. Good leaders enjoyed sparring
with me, even if they found it taxing.

In 2006, I met several times over the course of a year with several senior leaders in our aerospace business tasked with improving the business unit’s software development efforts. For weeks before these meetings, the team researched questions I posed to them. Tim Mahoney, then Aerospace’s chief technology officer and now Honeywell’s senior vice president of enterprise transformation, remembered how at our first session together I pummeled them with follow-up questions for five hours. We talked through the nuances of the technology the software developers were using, the financials, and the talent his team was deploying. “Yes, it was fatiguing,” he said, “but it was also exhilarating.” When he left the meeting, he remembered being “even more excited about what we were going to achieve” than he had been when the team had walked in. 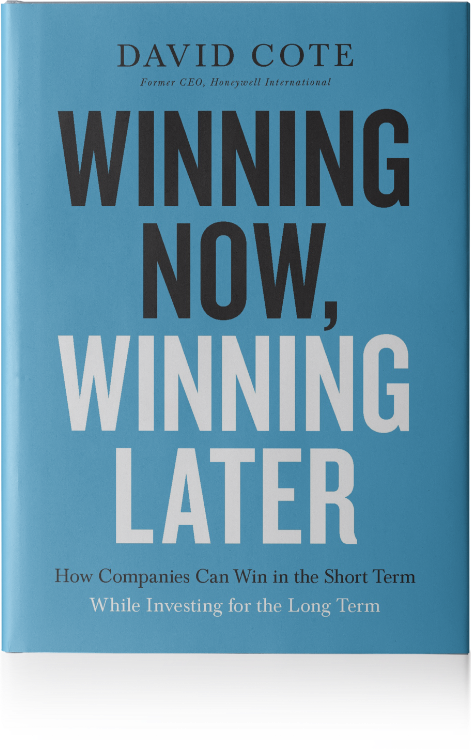 Winning Now, Winning Later: How Companies Can Win in the Short Term While Investing in the Long Term

"I talk to more CEOs than anyone on Earth, and my advice to them is ‘get this book,’ because I am sick and tired of the griping and the grousing about how they aren't given enough time to work their magic. David Cote is living proof that you can perform both short and long term, and he's laid it all out for you to do it. Anyone running any business needs to satisfy more than themselves. Cote tells you how to do the job to everyone's satisfaction. Believe me, his task was a lot more difficult than yours will ever be unless your name is Hercules and you work at Augean Stables, Inc! "

“David Cote is the most successful leader of a major industrial manufacturing company of his era. Of course, there have been some extraordinary high-tech successes with CEOS who are deservedly rock stars. But in the manufacturing area, David Cote stands alone.”