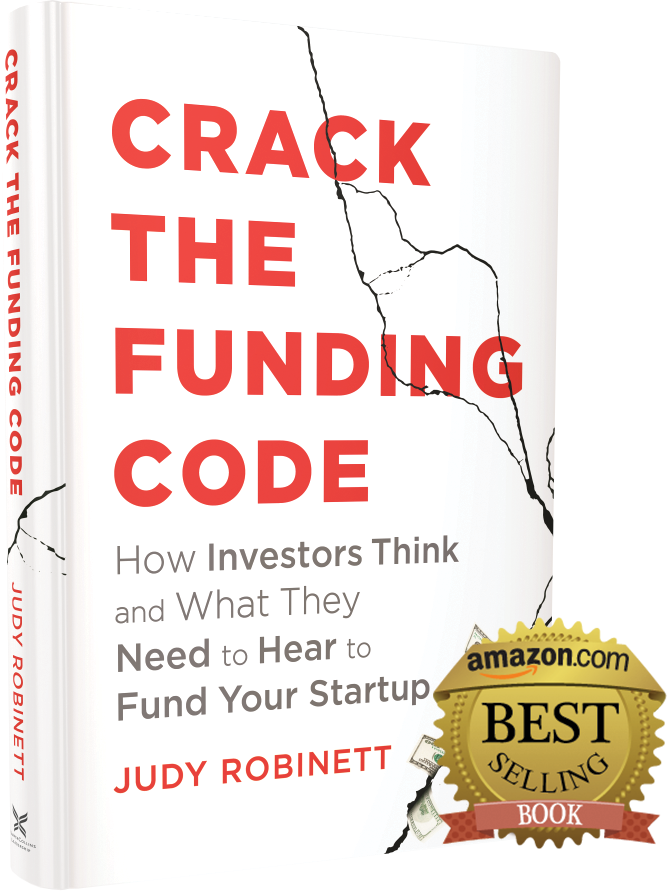 JUDY ROBINETT HAS BEEN FEATURED IN 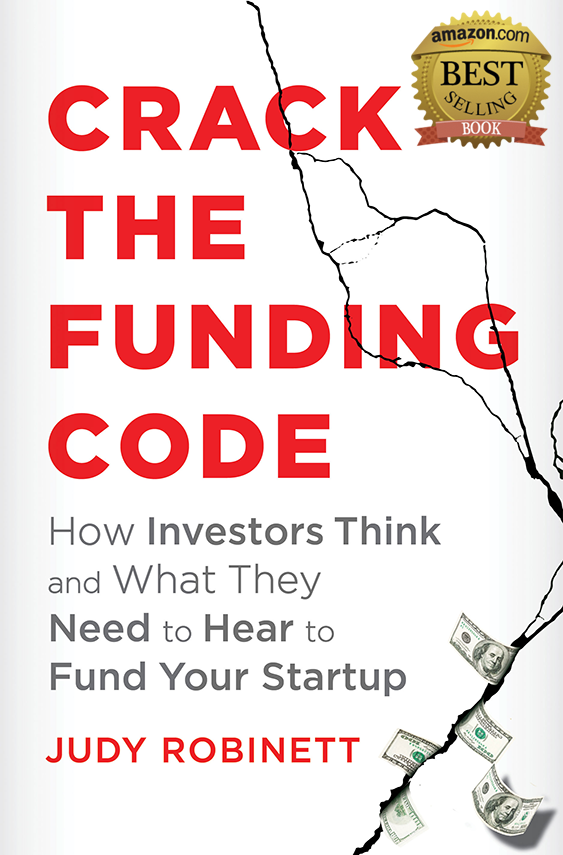 Crack the Funding Code demystifies the world of angel investing, venture capital, and corporate funding and lays out a strategic pathway for any entrepreneur to secure funding fast.

Lack of funding is one of the biggest reasons small businesses fail. In 2016 in the United States alone, more than 31 percent of small business owners reported that they could not access adequate capital, and the lack of capital prevented them from growing the business/expanding operations, increasing inventory, or financing increased sales.

Most business owners believe that their only feasible funding options are (1) savings or personal credit, (2) friends and family or (3) bank loans. They may have heard about venture capitalists or angel investors, but they don’t have enough information about what these investors do, what they can provide for a business, and on what terms. What’s worse, entrepreneurs often don’t know how to access the people who are looking to put their money into young companies with potential.

Finally, business owners don’t have enough expertise to navigate the treacherous waters of outside funding. Many small companies don’t believe they are the type of company that gets funded. Even when business owners are brave enough to look for the right outside investors, they don’t know how to create the compelling pitches or how to structure the deals that will get them the funding to expand and grow.

Crack the Funding Code will show readers how to find the money, create pitches that attract investors, and then structure fair, ethical deals that will bring them new sources of outside capital and invaluable professional advice. It will give readers the broader perspective—how funding works, how investors think, and what they need to hear to put their money where your mouth is. Every entrepreneur who reads this book will get easy-to-follow deal checklists, a roadmap of where and how to locate the best funding resources and top business mentors for their particular industry and/or geographical location, and a step-by-step process to create pitches that make their idea or business irresistible.

“Judy Robinett is the real deal, a no-nonsense kind of person who is offering you access to ‘insider’ secrets to raising capital… Crack the Funding Code is filled with wisdom drawn from both sides of the table. It will show you how to create the right pitch, get to the right people, and package your offer the right way, so you can land your own million-dollar deal—no matter which ‘Sharks’ you are pitching.”

"Unlike many books in this genre, this one is written by a woman who has lived it.. . . Judy Robinett offers guidance on how to form authentic relationships that bring mutual benefits."

"How to Be a Power Connector is like an MBA in networking: an advanced course in finding and developing quality relationships with the people who can make the biggest difference in your professional success."

"Talk about power! Follow Judy Robinett's logical, straightforward, and helpfully detailed advice, and you can be a 'Power Connector' yourself! Great ideas, well presented, with no ‘wasted space’ in her argument!"

"Absolutely brilliant. A step-by-step guide to building a network that will be both invaluable to you and just as valuable to those whose lives you will now have the opportunity to touch. I can't imagine a more powerful book for one who truly desires to be a Power Connector."

—Bob Burg, coauthor of The Go-Giver and author of Adversaries into Allies

"In the C-Suite or in your personal life everything comes down to the quality of your relationships. Judy's book helps you attract and maintain the relationships that will get you what you want most. Be a super connector now!"

Judy Robinett is the author of “Crack the Funding Code: How Investors Think and What They Need to Hear to Fund Your Startup” by HarperCollins, January 2019, and “How to Be a Power Connector: The 5-50-150 Rule,” #1 of The Top Ten Business Books of 2014 by Inc.com. Robinett is a business thought leader who is known as “the woman with the titanium digital Rolodex.” She has been profiled in Inc., Forbes, Venture Beat, Huffington Post, and Bloomberg Businessweek as a sterling example of the new breed of “super connectors” who use their experience and networks to accelerate growth and enhance profitability.

In her more than 30 years of experience as an entrepreneur and corporate leader, Robinett has served as the CEO of both public and private companies and in management positions at Fortune 500 companies. She has been on the advisory boards of Illuminate Ventures, an early-stage venture capital firm based in Menlo Park, California; Pereg Ventures, a venture capital firm based in New York; and Springboard Enterprises based in Washington, DC.

She was a managing director of Golden Seeds Angel Network (the third most active angel investment group and one of the largest in the U.S.); the CEO of publicly traded Medical Discoveries; and she served on the faculty of Goldman Sachs’s 10,000 Small Businesses program. She consults internationally with businesses looking for U.S. investors.

She was a member of the Department of Commerce team that defined performance criteria for the Malcolm Baldrige National Quality Award for Performance Excellence in Healthcare, for which she received an award from President Bill Clinton.

Robinett has given over 400 speeches worldwide for audiences at Deutsche Bank-London (TedX invitation only event), MIT, BIO-Europe, ActionCoach-Sao Paulo, Brazil (2019), CalPoly, AT&T, Westinghouse, and the Department of Energy.

She is the coauthor of a chapter in Crowdfunding for Dummies by Sherwood Neiss, Jason W. Best, and Zak Cassady-Dorion (Wiley, 2013). 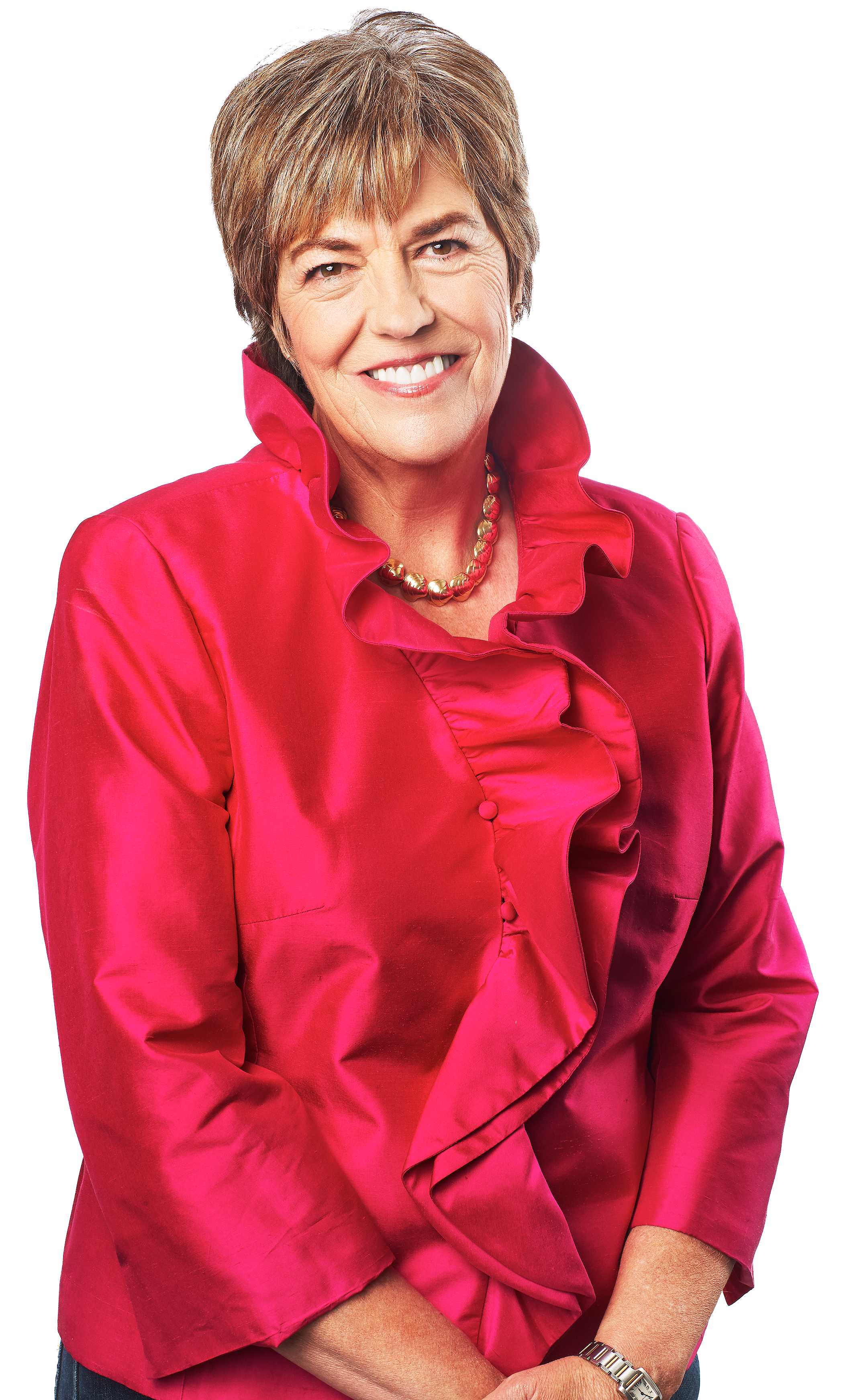 Lack of funding is one of the biggest reasons small businesses fail. Learn how to get funded fast!